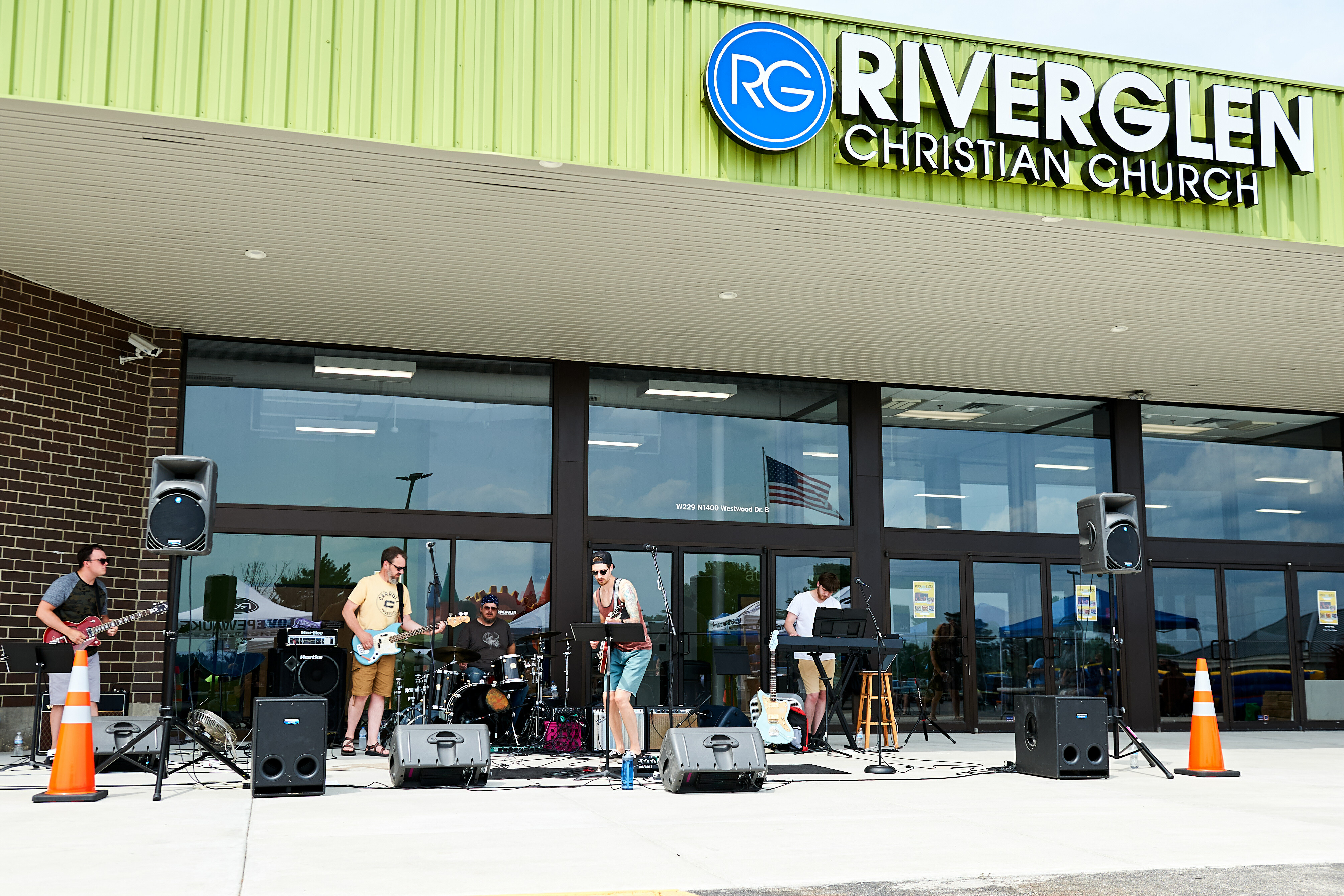 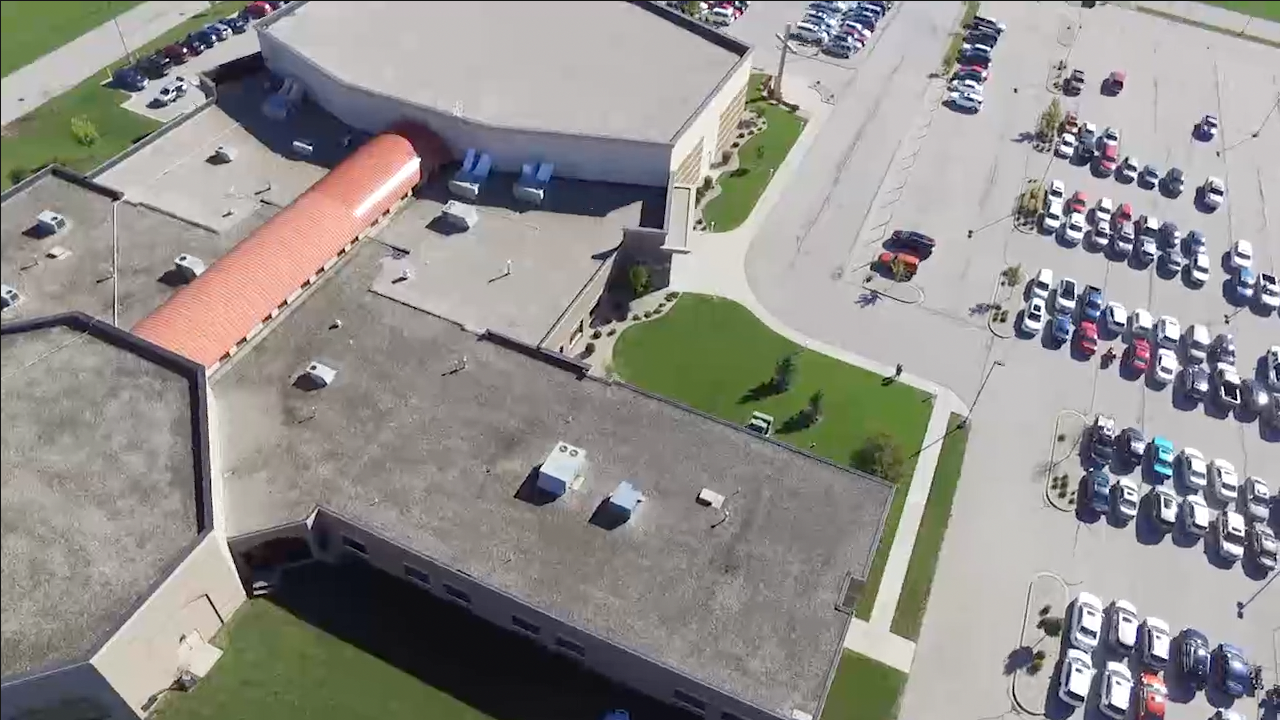 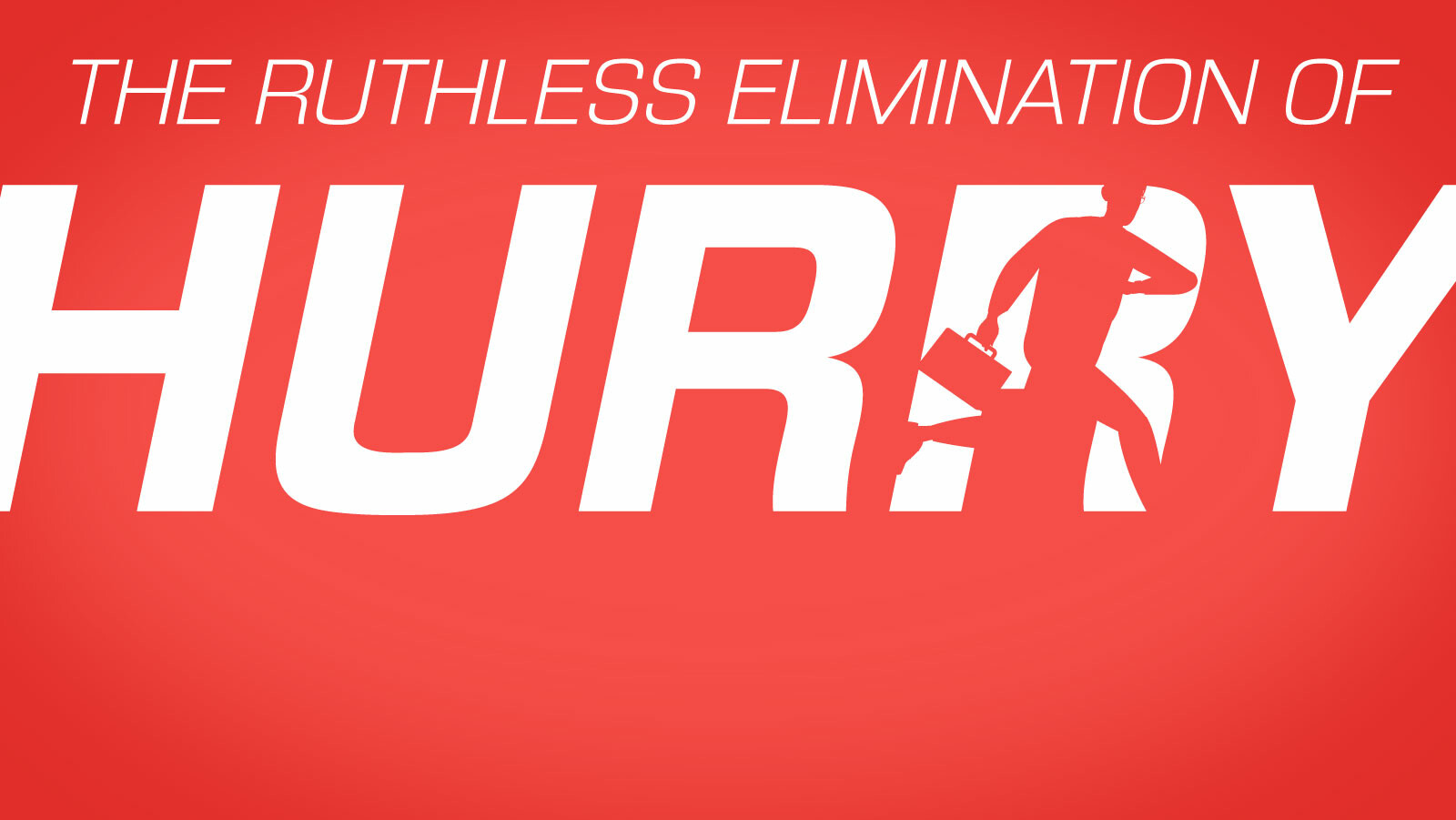 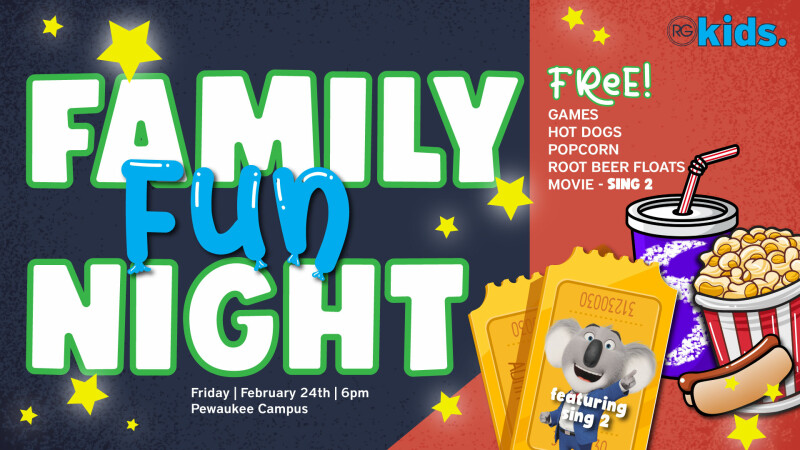 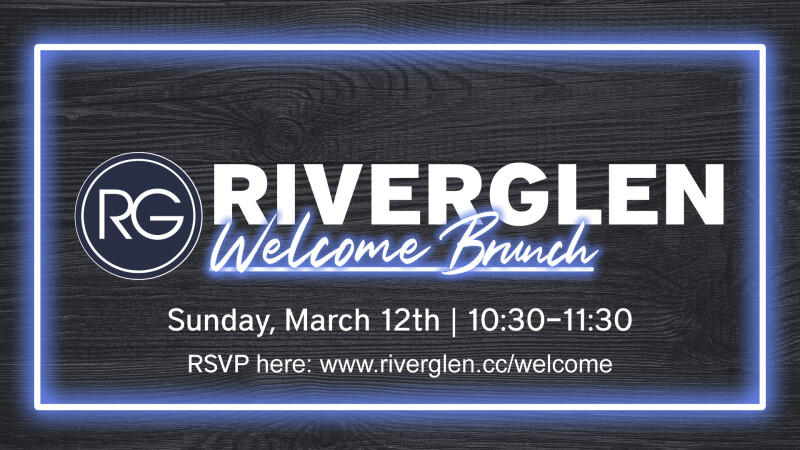 Missions Trip to One Church Pittsburgh

How God Stopped Me From Hurry

The year 2021 was an abnormal year for most. COVID-19 was prevailing, workplaces were trying to keep up with protocols to keep their workers and customers safe, and masks were still recommended nearly wherever you went. Life was still off, gloomy. Depression was on the rise, and the societal side effects of COVID were starting to show.

But as others continued to desperately find their way back in a post-pandemic world, Ken Kojis saw an opportunity to pave his own way.

“In 2021, I felt like I was behind in life," he says. "I needed to catch up to my peers. I was trying to rush ahead in my career and made decisions that were not godly. I went against how God was directing me because I wanted to take control of my own life. I felt like I had to make my own way in life and my own money, because the way that people told me how God works, wasn’t working for me. I turned away from Him and was incredibly angry.

In 2021, Ken was experiencing a season of extreme hurry. “I hustled my way into a warehouse job, with resentment towards God’s direction for me. I felt like I left-turned away from whatever He had in store for me. I was angry at Him and just wanted to make money. I took the warehouse job because it was good pay.”

At RiverGlen Christian Church, our message series Ruthless Elimination of Hurry talks about hurry. In fact, there's actually a diagnosis for constant hurry... it's called hurry sickness. Ken definitely feels like he could relate to a lot of the points made in this message series. “I always felt like I didn't have enough time. Just because of how my life was turned up to 11. I fell through with responsibilities when I had hurry sickness. I'd say I’m going to do something and then I would never fully commit because I was rushing around at 110%.”

Ken admitted back then that he was struggling with something. But It wasn’t until Ken started to pray to God that he acknowledged it was hurry sickness. “My prayer life would be staring at the sky and asking God to stop me if I was going in the wrong direction, because I wasn’t going to stop myself, and I just needed to have Him intervene. I felt like I had no other way to stop other than God stopping me.”

Ken knew he couldn't do it on his own. He had become a victim of his own hurry. “I felt like I had to constantly hustle and I wanted the monetary gain to be my success and not the success of God. When I was working my warehouse job I felt like I was catching up to my peers. I would say short term if fulfilled me, I enjoyed what I was doing at the job and had some type of gratification.”

For Ken, God’s answer to his prayers came in an unexpected form. On April 15, 2021, Ken had a workplace accident that resulted in his life being changed forever. “April 15 2021, I had my accident. The coming to God moment was when I was pinned, I looked up to the ceiling and my first words were “Oh my God.” Then it hit me. Oh God, Oh no. I realized that in that moment if I died, I was going to heaven... This was the start of something new.” 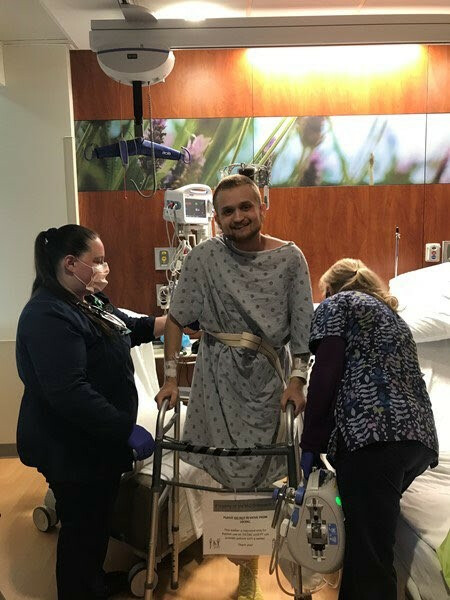 April 15 brought Ken to a complete stop in life. It started a long road to a slow recovery. Ken found himself with a shifted view on life, hurry, and God. “When I asked God to stop me, I asked him to redirect my path. I prayed for him to physically stop me. When my ankle was taken away, I realized that I loved being active. And I knew that this was his way to redirect my path, to really listen, to slow down, and stop hurrying to the next thing.”

Ken found himself hitting highs and lows through his season of recovery. He had to relearn how to walk, first without a prosthetic, then with one. But through it all, he persevered with a joyfully optimistic attitude. Some would say, there was something different about him. “The accident has forced me to be more present and care more about my faith. Now I understand the power of God and his love for me. It has made me learn the value of living in the moment and letting him determine my path for his glory.” 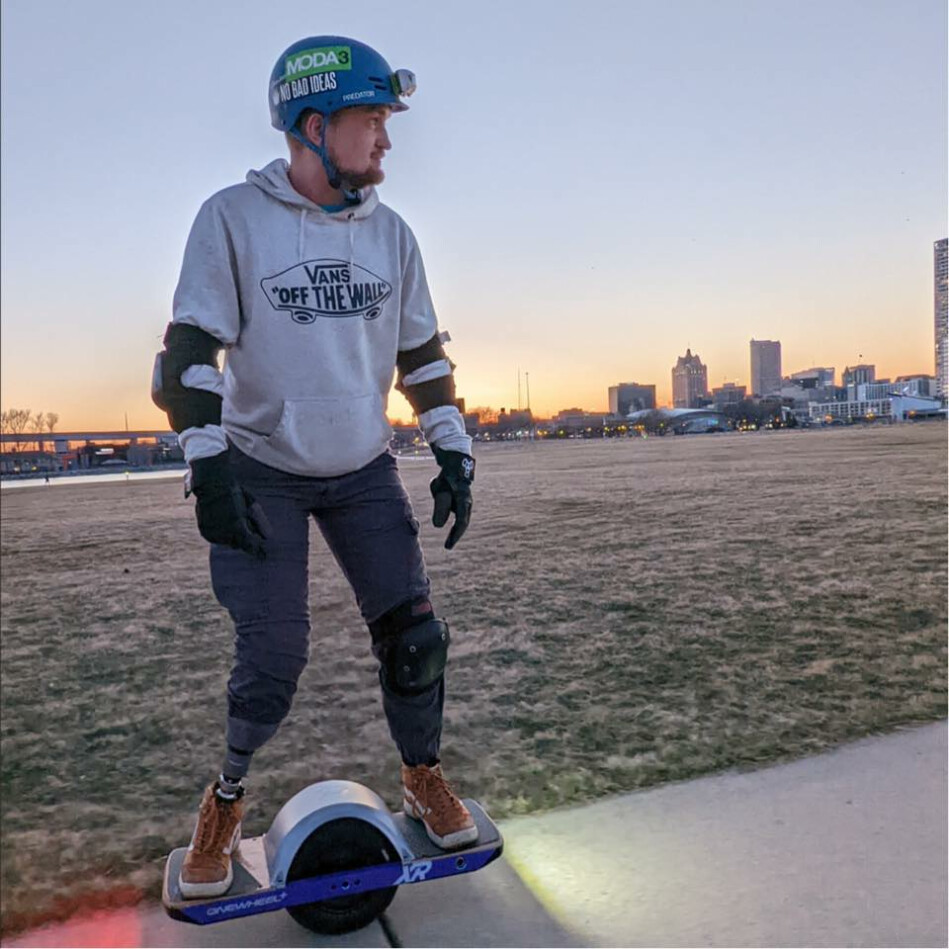 If you see Ken around RiverGlen or riding his One Wheel in Milwaukee, he’ll be the first to tell you that he still sometimes struggles with hurry sickness. “I still struggle with hustle and hurry. I’m still learning this lesson today, through my relationships, my family, and my career.”

But Ken now has hope. “No matter where your life is headed, no matter the ups or downs, God is in control. He has got the best direction for you. I feel like I have more trust in His path and direction now. No matter how dark the path is, we can rely on our peers, our family, our church, and the bible to light our way.”

God really does work in amazing ways, doesn’t He?

LifeGroups Are a Come As You Are Place

We recently had a great conversation with our Next Steps & Event Lead, Ryan Stewart, about his experiences with LifeGroups at RG.

Q: What is your history with groups at RG?

A: My wife, Ashley, came to RiverGlen first and though I was reluctant, eventually I came along. I was recovering from a traumatic brain injury that I got while I was deployed with the Air Force. I was having a mental health crisis and I needed hope. Everywhere I turned I ran into a wall.

I didn't know where else to go so I started coming to church. I was moved by a message Ben gave and decided to be baptized. I still had a lot of big questions and I didn't have a place to ask them. I heard about the Alpha group. At Alpha, they tell you to ask whatever questions you want, and I said "well I hope you're ready, here it comes".

Q: How were your questions about God and faith received at Alpha?

A: There was no judgment at all. Everyone was glad that I was asking hard questions and was accepting of where I was at in my faith journey at that time. Everyone was respectful of my opinions and wanted to discuss them. It felt like a safe space. This allowed me to come to peace with the unknowns in faith.

Q: What were your next steps after Alpha?

A: My table group at Alpha connected really well and we decided to do Rooted together. Rooted allowed us to go deeper into the Bible and answered more of my questions and grew my spiritual disciples.

After Rooted we continued to meet as a LifeGroup. I still come to my life group leader with questions, a huge part of my spiritual growth was through that life group. A group to walk through everything with. Post covid we are all doing things alone and are isolated. It gave me an outlet to go and talk to someone. It’s not all spiritual: helping with life stuff, having fun, helping through struggles, that's stuff is important too.

Q: What would you say to someone who is unsure about joining a group?

A: I find that there are 2 kinds of people when it comes to hesitancy to join a group. One kind says "that's not for me, my wife is making me talk to you". To that person I say, what do you have to lose? It's a free meal and a chance to ask questions. In a society where people are judgmental, this is a judgment-free zone.

The other kind of person is new to church or new to RG. Doesn't have a community here. Maybe they have faith but want to go deeper. Or maybe you think that Alpha and Rooted aren't deep enough... This is your chance to help others go deeper and answer their questions. Jumping into an established group can be tough, jump into Alpha and start fresh and create community.

The next sessions of Alpha and Rooted start next week. I hope to see you guys there!

We started off The Ruthless Elimination of Hurry Message series this past weekend. I had a great conversation with Director of Weekend Services, Charity, about her experience with hurry sickness and learning to slow down.

​Q: Do you struggle with hurry sickness?

Charity: Yes. I resonated a lot with the message last weekend. I'm a mom of three kids, so rushing is kind of the name of the game. Getting everyone out the door in the morning can set a hurried pace for the day. I cut corners to save time, multi-tasking to where it feels like I'm not accomplishing what I need to well.

​Q:What helps you slow down?

​Charity: Time with God in the morning is essential. It's taken me years to get a good routine going. Right now what works for me is waking up 15 minutes before the kids and reading my Bible with a flashlight. It's an unhurried time and sets my heart on God for the day.

​Q:What would you say to your younger self in regard to hurrying, rushing?

Ready to learn more about slowing down and resting in Jesus? Click here for The Ruthless Elimination of Hurry message series.

Lynda enjoyed serving at Christmas Eve and since then has found fulfillment and purpose serving as a door greeter on the weekends. Lynda loves sharing a welcoming smile and hello with guests as they enter our building.

Be a part of the magic this year by volunteering for our Christmas Eve services!